When it comes to prime camera lenses, the 50mm lens is a classic. It’s the lens that everyone shoots on when they first take black and white photography in high school. It’s the lens that many famous photographers have used to capture the perfect shot. It’s a timeless classic. But what is the difference between the 50mm 1.8 vs. 1.4? I will explain the significant differences between these lenses and try to help you figure out which one is best for you. First, I’ll start by saying that they are both really great lenses, but have subtle differences.

The 50mm lens has been a classic lens for a long time. When cameras were condensed into smaller machines, and people started using 35mm strip film, the 50mm was there. Everything in photography beckons to a time in the past. The reason why the 50mm is so popular is that it gives the photographer an image that is comparable to the naked eye. Some might argue that the 50mm is a little more zoomed in than the naked eye and the naked eye sees more around 35mm. But the 35mm lens has its shortcomings, mainly that it’s just so wide! If you were to only have one lens, a 35mm doesn’t offer the depth of field that a mere 15mm more can deliver.

If there ever were a happy medium of lenses, it would be the 50mm. I could not think of a better option. If you go any wider things start to get distorted. If you zoom in and you can begin to run out of the room, especially when you are shooting inside. So let’s agree to just stick with the common consensus that the 50mm is the most popular focal length ever invented!

Can you use a 50mm lens for portraits?

Heck yes!! All versions and all makes and models of the 50mm lens are a go-to for portrait photographers around the world. While the 50mm is the ideal portrait lens, because it’s so diverse, professionals use it for all types of photography. It can be used for landscape shots, street photography, weddings, events, newborn or family sessions. You really can’t go wrong (unless you’re trying to photograph the moon)! 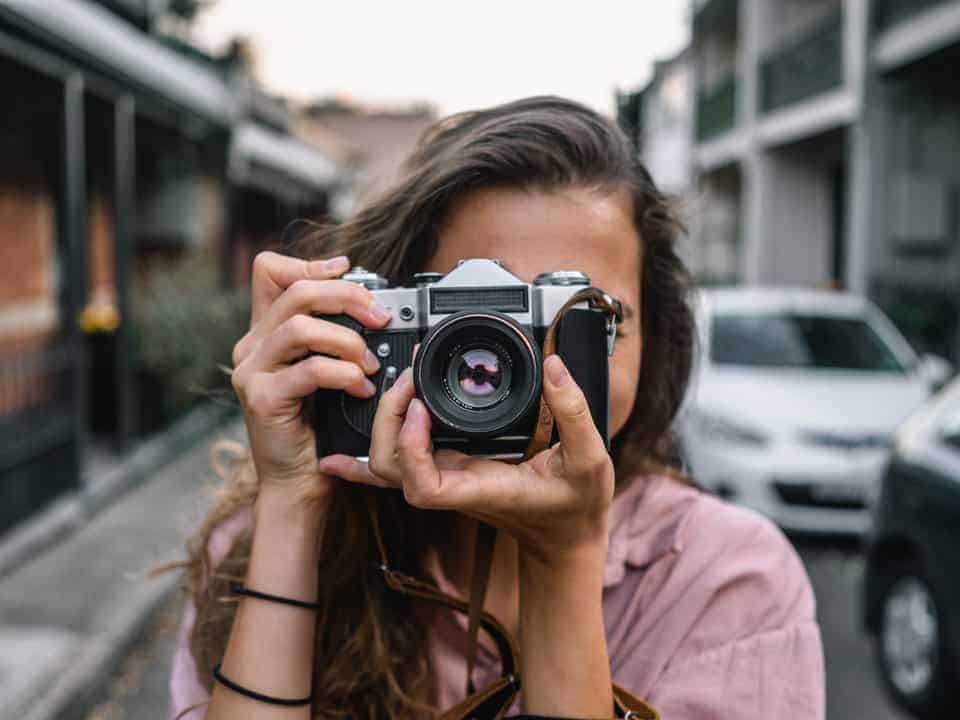 Ready to take your photography to the next level? 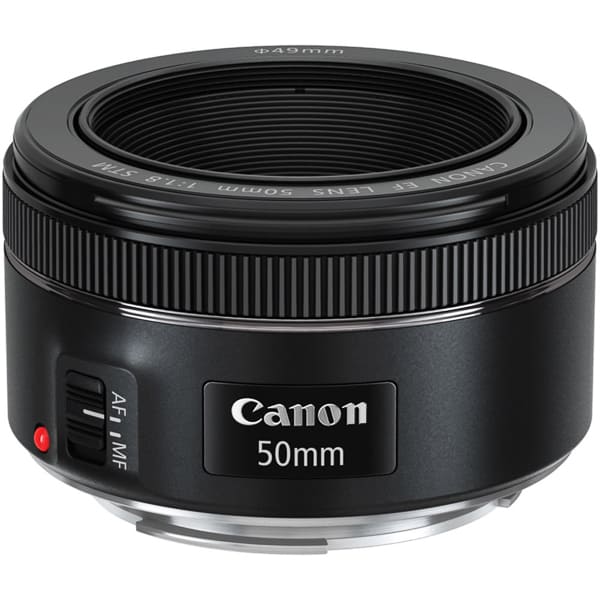 I would recommend getting the 50mm 1.8 as your first “real lens.” Your first DSLR will most likely come with the 18-55mm kit lens. This is an excellent lens to start with, but it has certain shortcomings. First of all most 18-55mm lenses only go down to an aperture of about f/3.5. This is just fine when you are starting and getting the hang of using your new DSLR, but it does restrict you from shooting using a nice large aperture. The 50mm 1.8 is very inexpensive as far as lenses go. I know when I first got into photography, I asked for this lens for Christmas.  They usually run around $100-140, this is a price that most nonphotographers can stomach. Its when you get deeper into photography and start wanting $1200 lenses when people stop supporting your art.

As soon as you make the switch from a lens that can only go from f/3.5 to a lens that can achieve a f/1.8 aperture, it will change your world. You will start to see how you photograph things differently. You will be able to separate people from the background and be able to get creative. Another aspect of having a prime lens is that you don’t have the ability to zoom. This is not a negative though; I think that it will make you a better photographer. By forcing you to get more creative with your shots, it allows you to start thinking outside of the box.

Like most things, the 50mm 1.8 does come with its flaws. The most frustrating thing for me has to do with the focusing motor inside the lens. I can’t speak for the Nikon 50 1.8, but the Canon lens has a loud motor. It’s not a deal breaker, but it is something that you will have to put up with, unfortunately. With most of the Canons, other lenses focus motors being almost silent, and the noisy motor always draws my attention. The 1.8 lens is also not going to be as sharp as its relative the 1.4. This is only to be expected because you are paying substantially less money for this lens. But all in all, it is a wonderful lens to purchase as your first prime. You will be blown away by what you can do with this affordable lens. 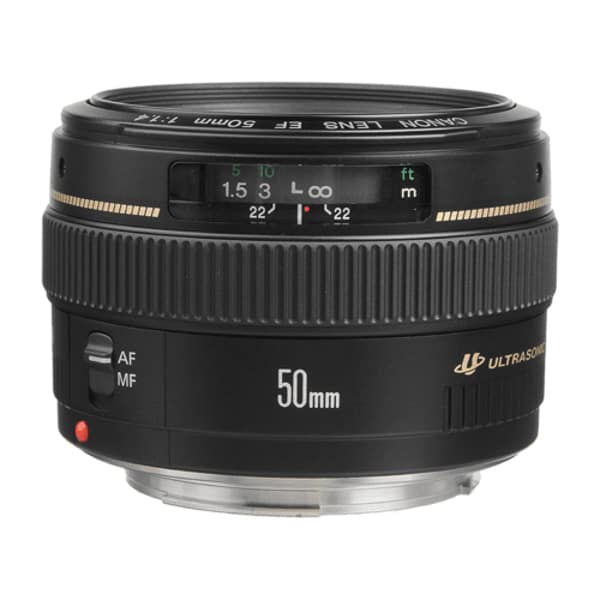 When it comes to the battle of the 50mm 1.8 vs. 1.4, the 1.4 is a better lens than the 1.8. The 1.4 has a silent motor inside of it sound you can hardly hear the lens focusing. This is nice because it makes photographing a client more enjoyable not having to listen to your focusing motor. The 1.4 is quite a bit sharper than the 1.8 as well. If you shoot them side by side, you would easily be able to tell the difference in sharpness at the same aperture. It’s also nice that have that extra one stop of light. When you are shooting in low light situations, the bigger aperture helps. At a price tag of about three times what you pay for the 1.8, the money is well worth it.

There is an even more expensive model of the 50mm with an aperture of 1.2, but if you are not a full-time pro, I don’t think its worth the price. The 50 1.4 is a great all around camera and even being three times the price of the 1.8, its still a reasonably priced lens.

The 50 1.4 is a mostly plastic lens, so it has a little cheaper feel to it. It’s a heavier plastic than the 1.4 but plastic all the same. I have had some issues with the focus ring getting bent out of shape over years of use. This seems to be a problem that a lot of people run into, but I think its just a wear issue. If you use something a lot for a few years, it’s going to wear out. As a side note, most prime lenses are not sharpest at their widest aperture. I don’t recommend shooting at any lower than 1.8 on the 50mm 1.4 or 2.2 on the 1.4, but that’s all a matter of opinion. Overall the 50mm 1.4 is a workhorse that I have used as my primary lens for the past six years and its been a great lens!

How much is a Canon 50mm lens?

So, which Canon 50mm lens is best?

If you are just getting started with photography, I would recommend that you purchase the 50mm 1.8. Its a great lens for beginners and will serve you well for your first few years of shooting. The truth is, the 1.8 version can do almost ALL of what the 1.4 can except open up to 1.4. If you have been shooting for a little bit and want to get a 50mm lens, the 1.4 is excellent, but not necessarily worth the price. It’s still a fantastic lens that will deliver beautiful results. I don’t think that its necessary to pay the $1200 price tag for the 1.2 lenses when you can get amazing results from a $125 lens but that all up to you. Good luck with your decisions and happy shooting.

Check out this awesome video below comparing these two Canon lenses!

Dream of Being a Pro Photographer?

Join Cole’s Classroom today to make it a reality.