If you’re reading this, you likely are a little intimidated by using off-camera flash and trust me, I’ve been there.  I promise it’s nothing to be afraid of! This quick off-camera flash tutorial will get you on the right track. I am primarily a wedding photographer, therefore all of my examples will be related to weddings. Remember that most off-camera lighting concepts and principles are totally universal. Most, if not all of these techniques, will work for just about anything when using off-camera flash. For most wedding days, I’m a natural-light shooter. However, there are many times when adding a flash is necessary outdoors and once it gets dark, there’s no escaping its necessity.

Many natural light photographers are timid to take on off-camera flash, but if you’re shooting in sunlight at all – whether it be full sun or by back-lighting your subjects using the sun, you’re already well on your way! You’ve already mastered using the sun as your off camera light source.

There are three primary times when I use off-camera flash. In all of these instances I am using 580exII flashes with pocket wizards to fire flashes or more recently I’ve purchased the Canon 600 EX RT flashes which have a built in transmitter. The look of the photos is the same with either set-up, but I LOVE the 600 EX RT flashes because there’s one less moving part (no need for the pocket wizard), they have NEVER failed to fire, and I can change the settings on my off-camera flash from the flash I have mounted on my camera (instead of going back and forth to my light stand to change the settings on the off-camera flash).

My set up is to have one of the flashes mounted on my camera, and one on a light stand. For the sake of this post, I will refer to the flash on my camera as Flash A and the flash on my light stand as Flash B. When using off-camera flash with the 600 EX RT system, I always have a flash mounted on my camera because I use it to trigger the other flash.  Also, I am able to turn off Flash A from actually firing any light if I only want to use the off-camera light source. I often use flash for family photos since they’re the most formal photographs I take during the day. My main goal is that I want to make sure that they’re very evenly lit. But straight flash pointed at people from Flash A alone can look flat and boring. In these family photos, I am firing both Flash A and Flash B. The shot above shows my set up. In tight spaces, I can even move the flash a little farther away from myself to the left. I use Flash B firing more light than Flash A so that the off camera light is brighter and more dramatic whereas flash A is just filling in shadows. This gives me more dimension in the shadow area and a less-flat looking image: Having two flashes firing is also critical sometimes when photographing groups during the day with a bright beach background. One flash is often not enough light to balance the super bright background. In any scenario, while shooting family photos, I meter and expose for the background.

With my camera in manual with an exposure that will give me a nice background, I use the flashes to light the subjects. For this beach photo family photo, I am shooting at ISO 100, 1/200 of a second and f/8. Flash A and B are both on full power to balance that harsh sun behind the subject. If my flash power were any lower, my subjects would be very under-exposed since I need a camera exposure for the bright, bright background. Night shots are an awesome ending to a wedding album. I have two methods for shooting night shots. The first method has a very similar set up to my family photo setup. Flash B is usually beside me or in front of the couple, but much further off to the side. Remember however, I’m still lighting the couple from the front. For this case, I turn flash A off altogether. In above photo Flash B is much closer to the camera, you can tell because the couple looks pretty evenly lit.

In below photo, Flash B is about 20 feet camera right. You can tell by the shadows on the left side of the groom. I am a sucker for back-lit night shots! To achieve this look, it’s important to have Flash B completely hidden behind the couple (using their bodies to block it). If the flash fires and I can see the actual flash with my lens, I will typically get lens-flare. I often direct the couple to stand very close together so their bodes are touching. When I do that I don’t get flare from Flash B going right into my lens through a gap in-between the couples bodies.

Where to Place the Flash

My main goal is that I want the light to just hit the back of them. (This helps hide my stand, too!) I keep the light stand relatively low as another way to keep it from getting in the shot. It’s usually about the height of the middle of the subjects torso, or mid back height and pointed directly at the couple. You can experiment with moving flash B closer or further from the subject for different results. I usually start with Flash B about 10 feet away from the couple directly behind them. I do not fire Flash A at all. My Canon 5D Mark III does well in low light with noise, so I shoot at fairly high ISOs. If your camera doesn’t do so well with noise, stay with a lower ISO and use a slower shutter speed and a tripod if necessary. 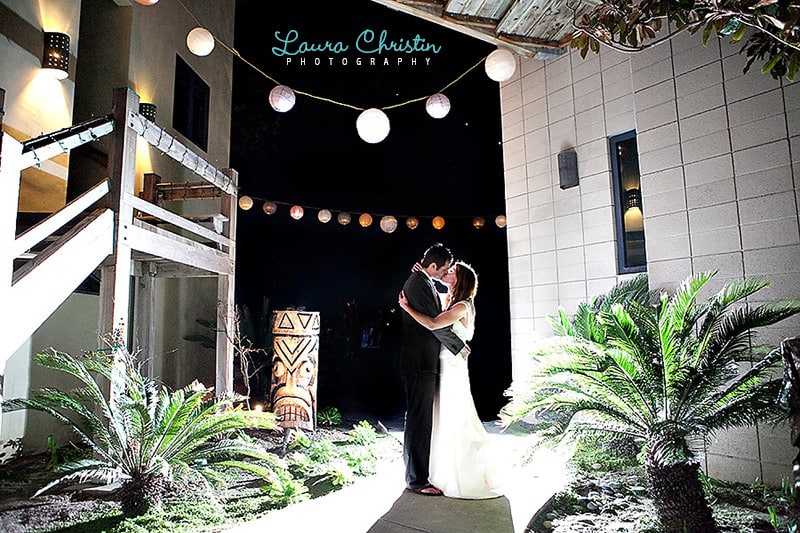 Here’s an example of a couple standing in the same scene. I tried lighting them from the front as well as the back. I prefer the back-lit look for this scene. In both photos, I am only using flash B. Lastly, I will use off-camera flash for dancing photos at the reception to maintain the ambiance of the dance floor. When indoors, I use flash A and flash B together. I bounce flash A off of the ceiling to maintain a tiny bit of fill flash and use flash B on a higher power than flash A to give me some dramatic lighting. When I am photographing outdoor receptions, I point flash A directly at the subject on a much lower power than Flash B which is on the side of the dance floor and my main light source.

In this first photo, Flash B is on the edge of the dance floor behind the boy in the striped shirt. I used his body to block the flash. For this photo, the flash is in the same place. My angle is turned 45 degrees left of the boy in the striped shirt from the last photo. Flash b is now a side light coming from the right: In some scenarios, I will turn off flash A and only shoot reception moments with flash B. I wanted to take a photo of this dance performance so that my angle would appear like that of a guest actually watching the performance. I didn’t want to use Flash A or it would have illuminated the heads of the people in front of me. Flash B is off to the right hand side, pointed at the dancer.

Here (below), I wanted to create the feeling of being a part of the dance party. In this instance, I am only firing flash B (which is on the edge of the dance floor behind the subjects). Using off-camera flash requires experimenting. You will need to tweak the exact settings with each set up. You can practice in your own backyard by lighting a tree or your BBQ or whatever is out there! Like all things photography related, it becomes much easier with practice!

Looking for more help with using your flash? Try these free tutorials:

Now it’s your turn, are you or are you not already using off-camera flash? Got any tips to share?  Let me know in the comments down below!

Wedding Photographer Words to the Wise – Chill Out! Nikon 105mm f/2.8 VR Macro Lens Review – Should You Buy One?

What is Dynamic Range and How it Affects Light

What Is Flat Lighting? (And Other Lights Photographers Talk About)